On November 26, 1864 the following report has been presented to the Governor General: 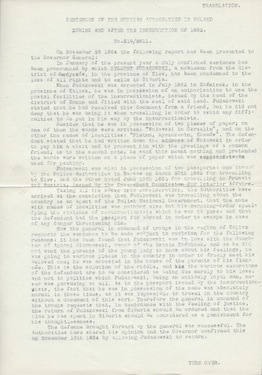 In January of the present year a duly confirmed sentence has been pronounced by which ZYGMUNT FUDAKOWSKI, a nobleman from the district of Berdyczow, in the province of Kiev, has been condemned to the loss of all rights and to exile to Siberia.

When Fudakowski was arrested in July 1863 in Kosminek, in the province of Kalisz, he was in possession of an authorization to use the postal facilities of the insurrectionists, issued by the head of the district of Konin and fitted with the seal of said head. Fudakowski stated that he had received this document from a friend, but he did not deny that he was using it when traveling in order to avoid any difficulties to be put in his way by the insurrectionists.

Besides that he was in possession of two pieces of paper; on one of them the words were written: "Wolowski in Okrzelin," and on the other the names of localities: "Pietno, Myszczenin, Kosmow." The defendant stated that he had written down the address of Wolowski in order to pay him a visit and to present him with the greetings of a common friend; as to the second note, he said this meant nothing and pretended the words were written on a piece of paper which was used for packing.

Taking all the above into consideration, the Authorities have arrived at the conviction that Fudakowskl was traveling about the country as an agent of the Polish National Government, that the note with names of localities was nothing else but his marching-order specifying the stations of insurrectionists which he was to pass, and that the defendant had the passport for abroad in order to escape in case of any danger threatening him.

Now the general in command of troops in the region of Kalisz requests the sentence to be made subject to revision for the following reasons: it has been found that Fudakowski was in love with the daughter of Antoni Biernawski, owner of the Estate Kosminek, and as he did not want the parents of the young lady to know about his feelings, he was going to various places in the country in order to freely meet his beloved one; he was arrested in the house of the parents of his fiancee. This is the solution of the riddle, and the various excursions of the defendant are to be considered as being due merely to his love, and not to politics which Fudakowski, being an entirely loyal man, never was pursuing at all. As to the passport issued by the insurrectionists, the fact that he was in possession of the same was absolutely normal in those times, as it was impossible to travel in the country without a document of this sort. Therefore the general in command of the troops requests that, in accordance with the feeling of justice, the return of Fudakowski from Siberia should be ordered and that the time he has spent in Siberia should be considered as a punishment for his thoughtlessness.

The defense brought forward by the general was successful. The Authorities have shared his opinion and the Governor confirmed this on November 16th, 1864 by allowing Fudakowski to return.

The above is accompanied by the following commentary made by the Polish historian who published the Sentences when the same were discovered in the Russian Archives after the Russians had left Warsaw during the War (in 1915):

The present case is absolutely unique in throwing a light on the conditions which had been created in 1863 in our unfortunate country. This Russian general whom his "feelings of justice" and his "disinterestedness" makes [him] invent the tale about the daughter of a gentleman-farmer who is supposed to travel about the country in order to meet her fiance today in one place and tomorrow in another place, these severe and experienced judges who, being also "disinterested," are rehabilitating the oppressed innocence and pretend to believe the report of the general, all this is an inestimable subject not so much for a writer of comedies as for the historian of the venality of Russian tribunals and Governmental Authorities. But it was good that they could "bribed, the despotism would have been a hundred times worse if it could not have been fought — by bribes."

Comment by George Fudakowski/Ford: The historian is probably right, and bribes were probably involved here. Even so, the love affair of the two young people was used as the excuse to reverse the sentence. It seems the Poles are incurable romantics.