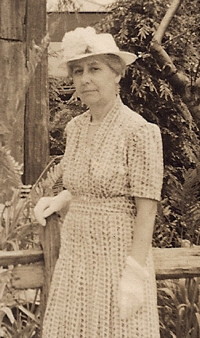 Born on March 30, 1881, in Paterson, New Jersey, Leonida was the only child of Thomas Krajewski and Rose Schnell Krajewska. She attended elementary school in Paterson, and later at the Packer School, a private school (then for girls only, now coeducational) in Brooklyn, New York. 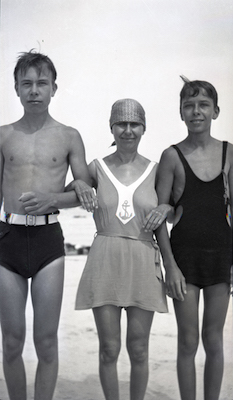 Leonida with Tom and George on Long Island Sound

A gifted pianist, Leonida studied in Vienna under the noted teacher Theodor Leschetizky when her family lived in Europe from 1896 through 1906. Beginning at age twelve on a trip to the Chicago World's Fair, and throughout her years in Europe and for the rest of her life, she kept a diary. The details of activities, places, events and friends in these writings are extensive, with entries for most of the days in this period of over forty years. The diaries depict a wide range in her life and lifestyle from a wealthy family living in New York and traveling in Europe, with friends including notables from all walks, to her extensive work with the Polish War Relief Committee in New York, her marriage to George Fudakowski in 1918, her subsequent divorce, and finally devoting her life to bringing up her two sons.

The clarity of writing, understanding and comments on important people and places in the earlier years are extraordinary from a young person, and are a remarkable record of her knowledge and interests. Later years reveal the stresses in finding herself and satisfying her true interests and emotional needs. From her early life her family was close to Ignacy Jan Paderewski, the famous pianist and first premier of free Poland, and his wife, Helena. This was particularly true after World War I started in 1914, when the two families spent much time together in the United States.

While living in Vienna, Leonida and her family toured the major European capitals as well as many smaller towns, resorts and spas. While living in New York, they toured the western United States and the newly-created national parks. She read widely, was fluent in German and French as well as English, and frequently attended lectures, concerts, the opera, theater, and movies.

Leonida and her young sons Tom and George moved to Greenwich, Connecticut, in 1926. Her diaries detail her involvement with their education at the Edgewood School and with other aspects of their lives, and reveal her overriding interest in them as the main element in her life.

Leonida died in Greenwich on December 10, 1941, a few days after the Pearl Harbor attack. She was 60 years old.