Rose Schnell was born in Paterson, New Jersey, on February 1, 1859, and attended school there.

Rose's father, Klemens Schnell, and her mother, probably married at the time, migrated to America in about 1855. They were Protestants living in predominantly Catholic southern Germany, and Grandmother Rose cited the religious persecution they suffered as the reason for their emigration. The Schnells settled in Paterson, New Jersey. 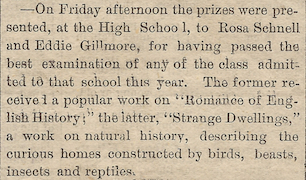 The family apparently was at least modestly comfortable financially, although Rose spoke of the fear of the "[financial] panic of 1879."

Rose and Thomas Krajewski apparently met in Paterson, where they married on August 7, 1880. The following year, their daughter, Leonida, was born. After Thomas's machinery business was established, the family moved to Brooklyn, probably in the early 1890s.

Leonida mentioned in a diary entry dated 1906 that Rose had an older sister.