Thomas was born in Warsaw, Poland on July 30, 1920, to George Fudakowski and Leonida Krajewska Fudakowska, his American-born second wife. The following year the family migrated to the United States and moved into an apartment on Central Park West in New York City.

George Fudakowski returned to Poland in 1925, leaving Tom and his younger brother George in the care of their mother and grandmother.

In 1926 the family moved to Greenwich, Connecticut, where Tom entered the Edgewood School. There he excelled in theater, art, music, and literature. Tom's parents were divorced in the late 1920s.

He attended Swarthmore College in Swarthmore, Pennsylvania. From the Halcyon Yearbook, Class of 1942: 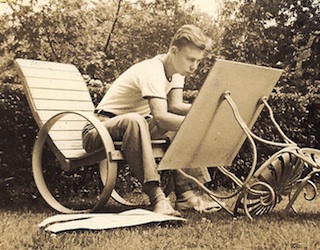 THOMAS IGNACE FUDAKOWSKI. At various times in his College career, Tom has wielded weapons of sundry sorts. Since his freshman year he has been a strong member of the fencing team; in the Little Theatre's "Patience" he paraded as a Heavy Dragoon; and in a one-act play last spring he had a broomstick battle with a home-breaker. He is far from belligerent in nature, however, and is respected by everyone. As a sideline, Tom indulges in sketching, and carries a major in English.

Tom was drafted into the Army in 1942. He received his basic training in Louisiana and served in China, India, and Burma (now Myanmar) under the leadership of General Joseph "Vinegar Joe" Stilwell.

Poised after the war to embark on a career in the television, advertising, and radio industries, he changed his family name to Ford. His work was honored with numerous awards, including eleven Clio Awards for excellence in advertising.

Tom and his wife Renée G. Ford, have two daughters, Suzanne and Lucile.